Results from rhinoplasty can bring dramatic improvement as it often rejuvenates your look and makes your profile complementary to your other features. The nose should seamlessly blend with your features and redirect the attention to your eyes.

What is the shape of your nose?

The shape of your nose can greatly influence how you look. Why? Because the nose occupies a central location on your face and having a nose that does not fit your face can disrupt the balance of your other facial features. If you think your nose is too big, too thick, misshapen, crooked or irregular, the facial surgeons at Rejuvent can help you.

The following are examples of nose shape issues and the resulted noses from Rhinoplasties at Rejuvent in Scottsdale.

One of the most common nose issues addressed with Rhinoplasty is the removal of a Hump. A hump is comprised of both overdeveloped nasal bones and cartilage. It is on the bridge of the nose and varies in size. Perhaps you just have a small hump and would like it to be refined? Or maybe it is a large distracting hump that gives you a Roman nose? No matter where your humped nose falls, rhinoplasty can be used to reshape your nose and change the focus of your face.

Hump Nose Results: As you can see her nose had a prominent hump. It detracted from her face taking attention away from her eyes. Dr. Bomer shaved the excess cartilage and bone from the bridge of her nose and the result is a more harmonious and feminine face. 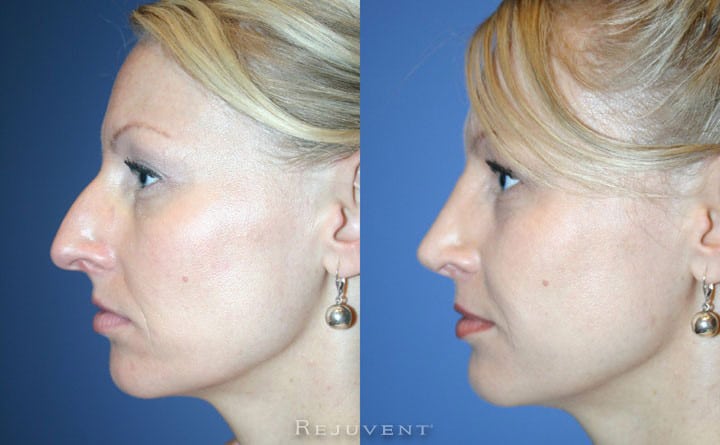 This type of nose can make you appear to have a very large nose, especially from the profile view. The over projection refers to how far forward the tip of the nose extends from your face. An over projected nose arises when the cartilage supporting the nasal tip is too big relative to other facial features. Rhinoplasty can bring the tip of the nose closer to the face, which balances the profile.

Over Projected Nose Results: This patient was so happy with her results that she added a nose ring to call more attention to her newly shaped nose. The result is a more delicate profile. Dr. Bomer also shaved cartilage and bone from the bridge of her nose. 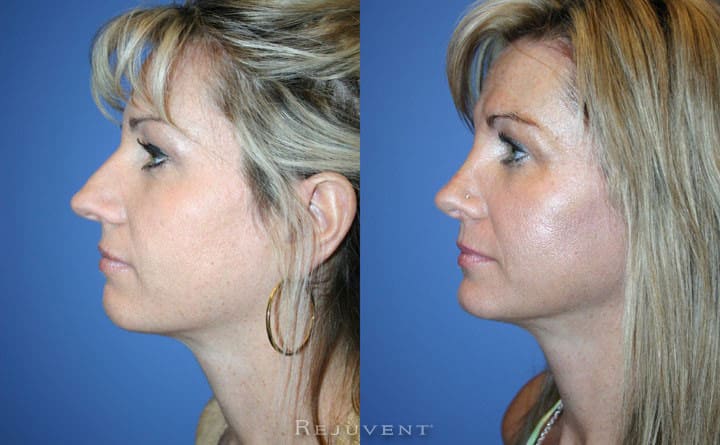 Patients with bulbous noses usually complain that their nose lacks shape and definition, or that they would like a more refined nose nasal tip. A bulbous tip results from overly large cartilage in the tip of the nose.  In addition, the cartilages may be concave instead of convex in shape.  Rhinoplasty in this case can reshape and thin the nose and accomplish a more defined look.

Bulbous (Amorphous) Tip Nose Results: This patient was unhappy with her large, poorly defined nasal tip.  It distracted from her other attractive facial features.  The cartilages in the tip were trimmed and reshaped to give a more refined, natural-looking nasal tip. 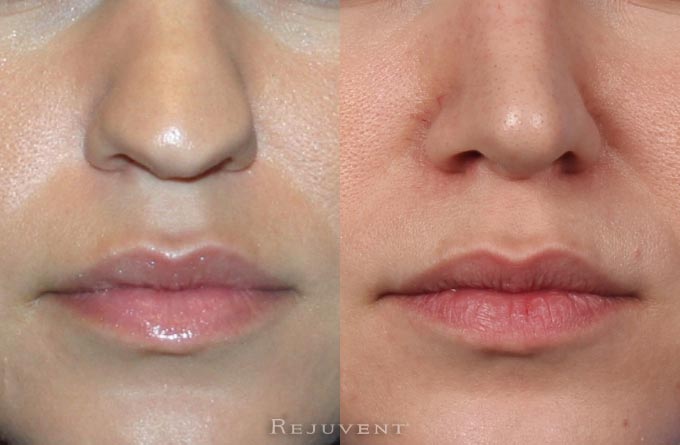 In women, the angle between the nose and the upper lip (nasolabial angle) should be 100-110 degrees, in men, it is 90-100 degrees.  The position and angles of the cartilages in the nasal tip create the nasolabial angle.  If the nasolabial angle is less, the nose is said to be under-rotated.  Rotation of the nose to a more favorable angle is accomplished with rhinoplasty.

Under Rotated Nose Results: This patient wanted her nasal tip to be rotated higher.  After rhinoplasty,  the increased nasolabial angle gives her a softer, more feminine profile. 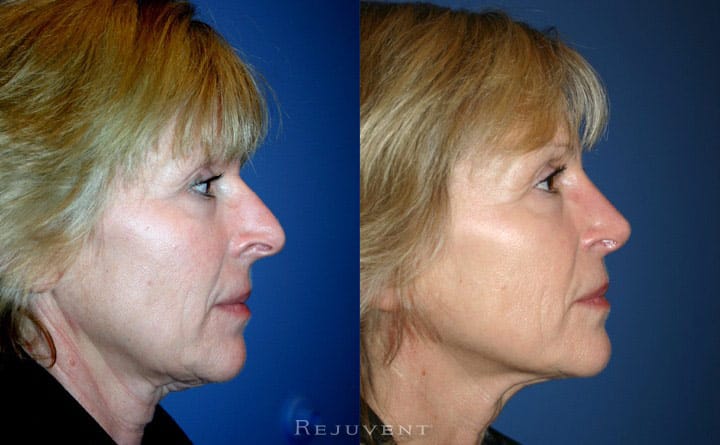 A crooked nose is often the result of trauma, but occasionally some noses develop a curvature of the cartilage in the lower half of the nose over time in the absence of trauma. Correcting a crooked nose involves repositioning the nasal bones as well as the cartilage. Often cartilage struts from the septum are placed along the dorsum to maintain a straight nose. It should be noted that straightening a crooked nose is one of the challenges in the field of rhinoplasty and is a frequent topic at national meetings. Sometimes when healing, the cartilage has memory and wants to revert back to its curved shape. This is why cartilage struts are helpful. A simplistic analogy is trying to straighten a crumpled piece of aluminum foil. One can get it very flat, but it is difficult to get it exactly to its original form. After severe nasal trauma, a rhinoplasty can tremendously improve the appearance of a crooked nose, but it cannot get it back to exactly the same shape prior to the trauma.

This patient had nasal trauma as a child and subsequently underwent nasal surgery as an adult to improve breathing and appearance.  3 years later she injured her nose again in a skiing accident.  She developed a crooked nose and deviated septum.  She underwent a revision rhinoplasty and septoplasty.  The nasal tip was refined and the curvature of her nose was improved.  Post-op, attention is brought back to her attractive eyes, instead of towards her crooked nose. 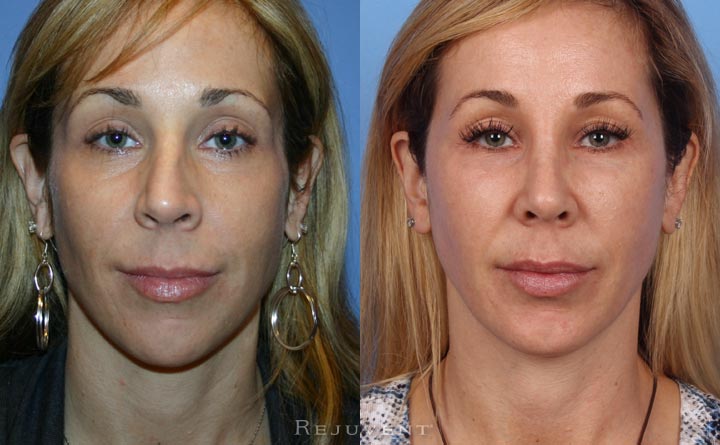 To see more before and after photos showing Rhinoplasty results performed in Scottsdale by Dr. Kelly Bomer, visit our extensive Rhinoplasty Gallery.

Dr.Bomer no longer offers Rhinoplasty. Instead, both doctors offer non-surgical Rhinoplasty nasal sculpting with fillers. Call (480) 889-8880 to schedule a consultation. We will be happy to answer any questions you may have while considering rhinoplasty surgery. The Rejuvent Medical Spa and Surgery facility, with Dr. Bomer and Dr. Bouzoukis, welcomes patients from Arizona, all over the United States, and internationally. The office is located in Scottsdale, close to Phoenix and Paradise Valley, Arizona.