How to Get Natural Results with Botox Video

How to Get Natural Results with Botox Video Highlights

How do Botox and Neuromodulators Work?

What Much Muscle Weakening Do They Provide?

The degree of weakening you are going to get depends on how much it’s injected and how big the muscle is. You can get partial weakening and you can get complete weakening depending on how much you inject in correlation to how many neuromuscular junctions there are, which correlates to how bulky the muscle is.

Botox takes 3 days to 10 days to take effect. It is broken apart into little pieces of protein and those protein pieces are released from the nerve ending and then they’re released through our kidneys and our liver and they’re out of our system in about three weeks. The effect continues in terms of the weakening of the muscle for three to four months. There’s never been an instance where the nerve does not recover its ability to release the neurotransmitter again so in that time period the nerve regenerates and it then starts releasing the neurotransmitter again, which is why you start getting functioning again.

If you get this injection, once they’ve had the full cosmetic effect which is about three weeks it is no longer active in your system and is excreted from your body.

How Do They Work Aesthetically?

Dr. Bomer drew lines on Emily Glenn, the Rejuvent aesthetician to show how Botox and neuromodulators affect muscle and wrinkles. 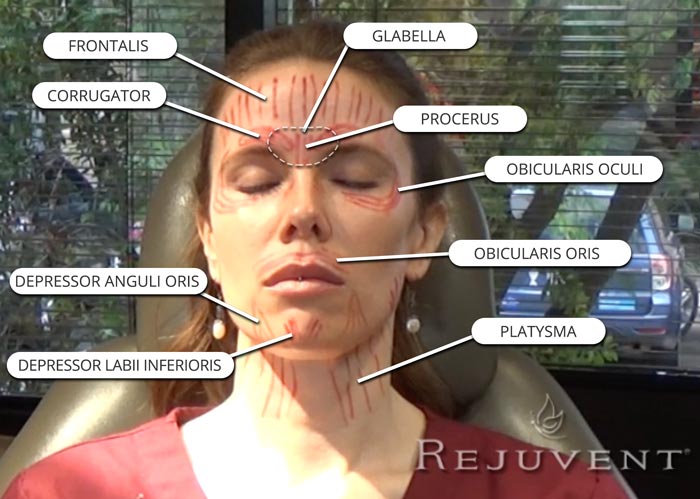 The forehead muscle striations are vertical and so when Emily contracts the wrinkles are actually perpendicular.

When we apply the Botox or Dysport or Xeomin they’re going to decrease the strength of this muscle and she will no longer be able to lift with the same strength. If a very large dose of neuromodulator is in this area Emily will not be able to lift her eyebrows at all.

There’s always a base tension in the muscle kind of holding the brows in a certain position if we were to completely take all the function of this contraction away Emily’s eyebrows would actually drop and that is typically something that women really do not like when they have Botox injections. If the brows are very heavy it doesn’t look natural and it tends to look like a really glassy forehead and gives no movement to the brow at all. One of the ways in which it can be overdone is if the whole muscle is not addressed and just the forehead’s central part is injected then when you lift the brows, the central forehead area stays down and the lateral part will lift up and that is the what we would refer to as a “Spock eyebrow” where you get a really strong peak laterally and nothing going on centrally and that doesn’t look natural.

The Glabella area – The Corrugator muscles and the Procerus muscles.

In the Glabella when the Corrugator muscle contracts you get vertical wrinkles, commonly referred to as the “eleven lines”.

When the Procerus muscle contracts you get horizontal wrinkles.

The Eye Area – The Obicularis Oculi muscle is the muscles around the outside of the eye, it goes all the way around the eyes. When the Obucularis contract you can get wrinkles in the crow’s feet. Dr. Bomer feels it’s important to be careful in this zone because if this is addressed to aggressively it can affect the elevation of the cheek. It is very important to choose a doctor expert in facial anatomy to avoid issues.

The Depressor Anguli Oris muscle turns the corner of the mouth down and the chin contracts upward. Botox and neuromodulators in this area soften the contraction and also addresses the chin dimpling.

The lip and chin area should be treated lightly as we need movement in those areas. In the Glabella area, it is often good to get that contraction stopped at almost a hundred percent. When we can’t contract the Glabella the outside public doesn’t recognize it and they just think that we’re relaxed and happy. Dr. Bomer’s opinion is that it is important that we have some mobility of the brows and that the brows are elevating in a natural way.

To achieve a natural-looking result the doctor really needs to analyze these muscles in each person as they do vary from person.

The Jaw – The Masseter Muscle is a muscle we use when we chew. Some patients have this muscle very pronounced and distort the shape of the face. On a woman, it looks masculine and squares of the shape of the face. People with very pronounced Masseters often will have symptoms from grinding their teeth they’ll often have a mouthguard. Neuromodulators in the Masseter reduce the size but it does not affect the ability to chew.

Vertical Neck Bands – When we contract the Platysma muscle we get these vertical lines in the neck and neuromodulators like Botox can actually weaken the strength of this muscle and reduce some of these platysma bandings. It does not usually work on patients with a lot of laxity but it’s really great on somebody who doesn’t have a lot of skin laxity. It really helps to promote a nice angle to the neck, reduces the strength of the contraction, and reduces the propensity to get the neckbands.

The Differences Between Botox, Dysport, and Xeomin

We analyze the work performed at Rejuvent with before and after photos of all patients. Our doctors like to really understand how products work and how different techniques work. We invest a lot in before-and-after photographs which is important for the doctors to use to analyze their own work but also for patients to see what has happened to them.

This analysis led Dr. Bomer to see the difference between these products. She believes that Botox is more focal and what that means is where you inject it is where the effect tends to stay. Botox tends to stay close to the needlepoint where you put it.

Dysport tends to spread a little bit from that point that you injected so the spread of effect is a bit broader.

Xeomin is in between and spreads a little bit but it doesn’t spread as much as Dysport does.

The Rejuvent doctors like to maximize all these products and use them so that we get the best aesthetic result in the face.

For example, the forehead is a big broad muscle, Dr. Bomer finds that because Botox is very focal it will have a tendency to have certain areas of the muscle not addressed. In Dr. Bomer’s opinion, Dysport does a better job at giving a much more natural look in the forehead because the effect spreads. You’re able to get a nice smooth application of Dysport without complete weakening so you still are able to contract the muscle. When you contract the muscle it looks more natural.

The doctors really like Xeomin in areas like the lip and the corners of the mouth because it spreads ever so slightly. It provides some softness to it but it does not go too far.

It is to our advantage to have these different products and to understand their actions in the tissues and how they work differently. It is also helpful to understand that for certain people we want something to be very focal because they have a certain type of anatomy and then there might be other patients who will need a little bit more spread of the effect.

Dr. Bomer believes that Botox has more of a flattening effect on the tissues and Dysport actually plums the tissue a little bit so she tends to gravitate towards Dysport on people that are a little bit more thin and bony and Botox for people that have been more fleshy.

Dr. Bomer has been injecting Botox since 2002 and photographing patients since 2004. She has developed her technique over the years and has trained Dr. Bouzoukis and the Rejuvent Botox Nurse Injector to achieve the same results as she does.

Through her experience and the study of before and after pictures they learned how each product work and how they can utilize them to their maximum to achieve a result that is truly natural-looking. So when you’re out in public the products actually maximize how you look and make you look better but you don’t look altered, you don’t look artificial, you don’t look different. You just look better. That is that’s the art of being able to understand the science and then put that together with how each individual face differs and use the products to their maximum.

Example of Bad Botox – Not a Rejuvent Patient 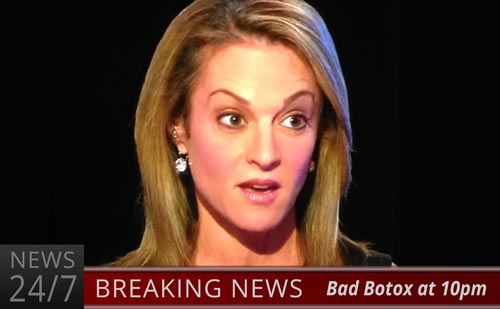 This appears to be an unnatural application of Botox in the forehead where you see the central forehead very glassy and not moving with the central brow being quite low and the lateral brow elevating to a very high place and creating an overall unnatural appearance to the brow.

Natural Results with Botox Before and After – Rejuvent Patient and Aesthetician 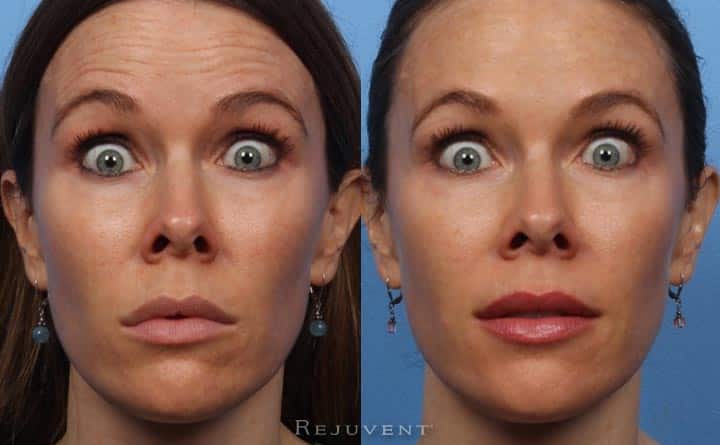 In the before image Emily is raising her eyebrow. She has full strength to her forehead. The after picture is about three weeks after a neuromodulator injection with Dr. Bomer’s method. The shape of the brow upon raising is about the same as in the before picture.
View more Botox before and after results 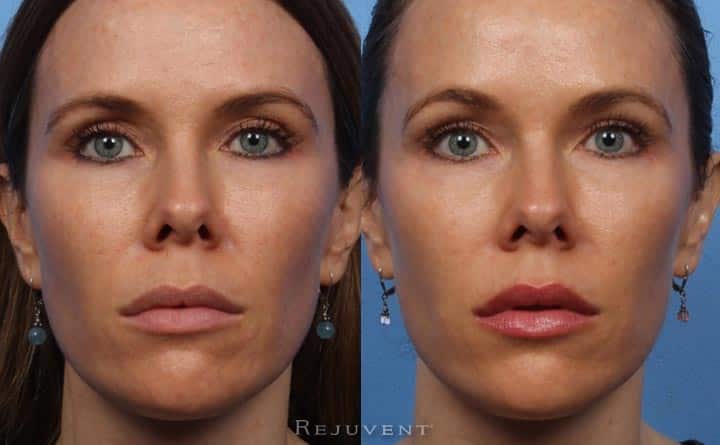 This is an image of Emily at rest, before and after neuromodulators. After Botox, her bow is elevated but it maintains her natural arch. Her eyes are brighter. 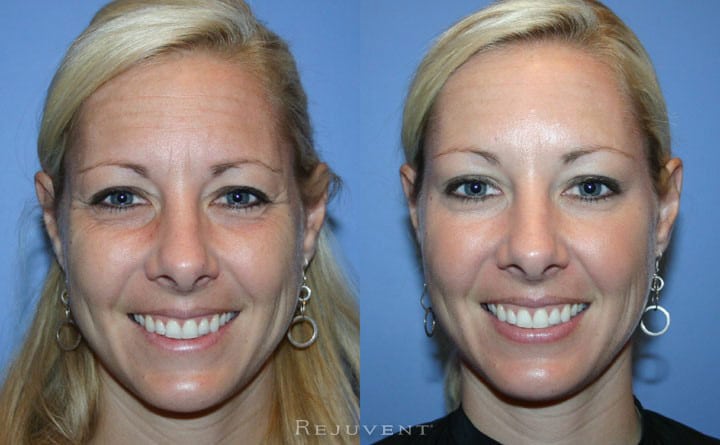 View the Rejuvent Botox Before and After Images

Dr. Bomer and Dr. Bouzoukis are expert injectors and achieve beautiful, natural results for their patients with Botox. You can view some of their before and after Botox photos and call for a consultation for Botox at Rejuvent. Call 480-889-8880 today.